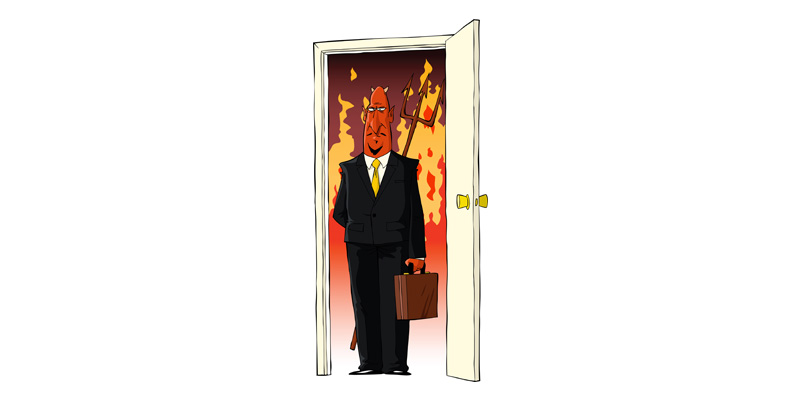 There’s no getting away from it: At some stage in your career as a web developer, you are going to run into the client from hell.

Maybe you already have. Perhaps you’re horribly familiar with the dread and plummeting morale that dealing with such a client entails. Perhaps you’re even unlucky enough to be facing this situation on a regular basis.

Don’t despair! Toxic clients don’t just randomly appear in your life like April showers or luxury watch spam. Much as the king of the jungle will announce his stately presence with a mighty roar, a truly awful client will usually signpost their arrival well in advance.

This article will teach you seven key warning signs to look out for as a web developer and provide concrete tips for dealing with clients who exhibit them.

Before we begin though, let’s cover one crucial point: responsibility.

You Get to Choose Who You Work with

When dealing with a difficult client, it’s very tempting to place all the blame squarely on his or her shoulders. The reality though – especially as a freelancer – is that you’ve explicitly agreed to work with them. You had the option to walk away right at the beginning and didn’t take it.

What happens thereafter is as much your responsibility as it is that of the client. There’ll be times of course where you have to bite your tongue and simply deal with a situation, but that initial decision to proceed is always yours.

If you take nothing else away from this article, remember this: who you work with is your responsibility.

As a professional, it’s up to you to define the parameters of your work. You should have your own procedures for screening clients laid out in advance and a carefully thought out contract template in place to mitigate against some of the scenarios we’re about to discuss.

Also, if existing clients show any of the signs on our list, you always have the option of firing them. Here are three useful scripts for doing so.

Finally, remember that the onus is on you to deal with situations professionally. Poor behavior on one side is no excuse to respond in kind. Maintain your dignity.

With those caveats out of the way, let’s move on to the seven classic warning signs to look out for. We’ve sprinkled some illustrative videos into the mix to drive the points home.

Nobody likes hearing it, but past behavior is an excellent guide to future performance and results. This red flag will usually rear its head in two ways:

This is a tale as old as the web itself. In the WordPress world, it will often manifest itself as a litany of woe where a client with no clear brief has already burned through a host of developers and theme designers and is now presenting you with the resulting Franken-project, angrily demanding that you make it right.

We’re putting this one first as it’s often a leading indicator for one or more of the problems below.

The first step here is simply listening. If you’re in the presence of a truly awful client, they may be about to save you a tremendous amount of time by outlining a list of reasons you shouldn’t work with them.

Don’t be afraid to dig into the specifics of previous failures, even if the client is uncomfortable or reluctant to do so. It’s the only way to accurately assess if this is a project doomed from the outset or something salvageable.

There is a particular class of clients who are madly, deeply, irrevocably in love with urgency. Everything has to happen “ASAP”; deadlines are constantly looming.

There are also people who use this quite deliberately as a tactic, operating under the illusion that it in some way motivates others to produce their best work. This is rarely the case.

As a web developer you should be very suspicious about these types of projects. Starting a project behind from day one – in addition to being intrinsically demotivating – is a strong indicator that corners will end up being cut, leading to a final result nobody will be proud of.

Remember, until you sign the contract, this is very much the client’s problem rather than yours. Take advantage of that.

Rather than react to the alleged urgency, begin by exploring the reasons why the project is already late. Going through these can be enough to surface other enormous red flags.

Interactions with clients do not need to be perfect to be effective. And some people are simply naturally more gifted communicators than others. That said, there are classic communication issues – some worse than others – that tend to foreshadow choppy waters ahead.

Let’s run through some greatest hits:

This is an area where it is up to you to establish clear boundaries from the outset. Developers often need to look at their own behavior first before addressing that of the client.

Make it clear early on what your standards are, stick to them, and don’t fall into the twin traps of passive-aggressiveness and/or silence.

4. Thinking They Can Do It Themselves

A generally well-informed client is a boon and a client who has experience with performing the job you’re hired to do can be an absolute blessing. A client who thinks they can do your job though is a curse. Avoid them.

There is no better way of illustrating the near infinite number of ways this can go wrong than by watching the following video. For some of you, this will seem more like documentary than satire.

Your only hope here is nailing down the exact project criteria in minute detail from the outset. You need agreed project methodologies, milestones and sign-off procedures in place to make it crystal clear who is doing what at every stage.

A good client, regardless of their level of expertise, should be prepared to let you get on with doing what you’re good at. If you’re looking for some high-level inspiration in this area, consider Paul Rand’s approach to dealing with Steve Jobs.

Clients often arrive with big dreams that have no earthly chance of being fulfilled. As an example, unless you’re pitching for a project with a budget literally in the millions, the words Facebook, eBay, YouTube or Twitter should be enough to set major alarm bells ringing.

Side note: The wilder and more poorly-defined the expectations are, the higher your chances of being asked to sign an NDA are. NDAs in themselves can be considered a potential red flag.

Raise the subject of money early with clients who exhibit this tendency. Thereafter – assuming you haven’t already shown the client the door – the key is drilling into exact requirements and explaining what is and isn’t feasible with the time, budget and resources available.

Given WordPress’ flexibility and power, there is often a real and achievable subset of functionality that can be implemented to the satisfaction of all parties.

Money is a magic potion that reveals true intent.

A client’s first reaction to the topic of cold, hard cash is an incredibly accurate indicator as to what your future dealings with them will be like. Watch out for the following warning signs:

Value-based pricing is your friend. You need to be confident in the value you bring to a project and be able to explain that in strictly monetary terms to a client i.e. by employing you they will be making money rather than losing it.

If you can do this and the client still balks at or disputes the terms, walk away. If you suspect there may be trouble ahead but are willing to give them the benefit of the doubt, include a project kill fee in the contract.

7. Offers Too Good to Be True

Sadly, there are people in this world whose intentions are far from pure. Some “clients” will be walking in the door with zero intention of ever paying you and possibly seeking to defraud you along the way in some arcane fashion.

As a general rule, trust your gut and walk away at the first sign of shadiness. Also remember that most scams rely to some extent on the greed of the victim. If something seems too good to be true, it probably is.

Despite the rage you’ll feel if do you find yourself cheated, virtually the only sane response is to treat it as an expensive learning experience. Attempts to claim money owed by genuine crooks are usually more trouble than they’re worth. Concentrate on not letting it happen again.

The following five books are all excellent resources for dealing with clients generally and potentially difficult people in particular.

When it comes to dealing with difficult clients, an ounce of prevention is worth a pound of cure. Learn to recognise the seven key warning signs early in the client courtship phase and you can save yourself a world of pain down the line:

There may be speed bumps along the way, but mastering this skill frees you to concentrate your energies on the huge amount of great clients out there just waiting to work with you.

Think we’ve missed a trick or have a horror story – no names please! – you want to get off your chest? Tell us all about it in the comments below.

The Complete Guide to Updating Enfold